Dragon Baby Is Here To Slay Dragons And Nap, And He’s All Out Of Naptime 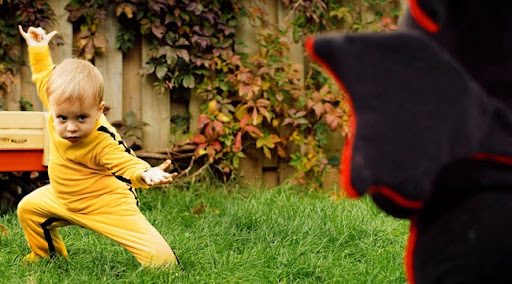 When we last featured the work of Patrick Boivin, he had made a cute, CGI-heavy video of an AT-AT behaving like a lovable pet dog and dropping steaming Jabbas on the sidewalk. Prior to that, he made a video of his baby daughter, Marguerite Bulte Boivin, as Iron Baby. Even though Boivan is self-taught, the video was so good that Iron Man director Jon Favreau tweeted a recommendation. Now Boivin is back with Dragon Baby, another cute and funny homemade video.

And, what the heck, here are the two previous videos as well:

(H/T: The High Definite and Pleated-Jeans)

The post Dragon Baby Is Here To Slay Dragons And Nap, And He’s All Out Of Naptime appeared first on UPROXX.

Each and every week we scour the Internet for nothing but the best in nerd based art. We leave no digital stone unturned, we poke and prod every net based nook and cranny. Why? Because we love you, and we love to bring you weekly Nerd Art Dumps.

Dr. Teeth, Animal, Sgt. Floyd Pepper, Janice and Zoot, the one and only Electric Mayhem -before Lips came in and ruined it with his trumpet. Douglas Holgate made this kick ass looking tour poster that looks to be pulled from our parents closets. This must have been an early in their career though since Zoot is nowhere to be seen, either that or this was during the first of his many drug-related offences. [The House Of Skullduggery]

Hit the jump for the Black Cat, The Avengers as Dragons and MOAR

It’s every skin tight jump suit clad cat cat burglars problem, where do you hide the loot? You’re never carrying a purse while jumping from building to building. Someone like the Black Cat does the next big thing according to Amanda Conner, she stuffs her stolen booty down her skin-tight cat suit! Now that’s using your… head. [Comic Alliance]

The cookies are up high and out of the way for a reason, that isn’t going to stop Skottie Young from having his baby super heroes try and go for the sugary goodness. Just… do these toddlers use their powers? Iron Man can fly or the Hulk could just push the fridge over, problem solved. Stupid babies. [Modern Age Comics]

Mondo makes some wicked alternate versions of movie posters and Jock knocked it right out of the park with this Dredd 3D poster. [Geek Tyrant]

Apparently just being The Avengers isn’t scary enough, so drawstillidie turned them intro dragons. So, there’s that. [Obvious Winner]

These are not the old school Teenage Mutant Ninja turtles we’re all used too, but Mike Sekowski took our bright and colorful television friends and flipped them into a much more gritty and realistic setting. Michelangelo, Leonardo, Donatello and Raphael are perfectly styled in such a way that even without their trademark masks the turtles are uniquely distinguishable. Turtle power dude. [Geek Tyrant]

This one’s pretty self-explanatory. At the very least the Joker should love Harley’s sense of timing, but cleaning up all that liquefied Joker gas is going to take forever and it’s a bitch to get out of purple suits. Thank god she’s pretty. [Deviant Art]