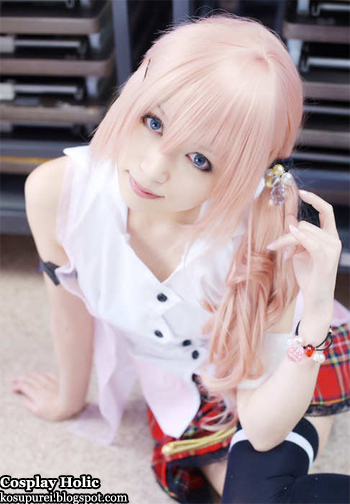 An 18-year old human from Cocoon, Serah Farron was born in Bodhum and is the younger sister of Lightning. After the loss of their parents, Lightning’s decision to raise Serah on her own unfortunately caused tensions between them. Worse, Serah’s engagement to Snow Villiers caused even more conflict as Lightning strongly objected to their relationship.

Cute cosplay! I mean, who doesn’t love pink hair, right? Thanks to Mist for sending this!

A Cocoon exile at the start of the game, Hope Estheim and his mother, Nora, were visiting the town of Bodhum when they were caught up in the Purge and exiled to Pulse. Under Snow Villiers’ leadership, Nora joined the resistance in the Hanging Edge. Unfortunately, Nora fell to her death during the battle while trying to protect Hope and after saving Snow’s life. This incident angered Hope and he and fellow exile, Oerba Dia Vanille, followed Snow to the Pulse Vestige.

Really great cosplay and location! First time I’ve seen Takeshi Photography’s work, but I’d love to see more from this photographer. Thanks to Daniela for sending this in!