Panty and Stocking with Garterbelt

Stocking is said to be more intelligent and responsible than her older sister, Panty. She has a gluttonous appetite for sweets and does not eat spicy food. She is often seen carrying a plush cat named Honekoneko whose expressions match Stocking’s mood. Her stockings transform into a pair of swords known as Stripes I & II.

Beautiful cosplay and quite an interesting series. I think how she managed to create that wig is probably the best part about this cosplay. Thanks to MPZero for the awesome photography work and to Alice for sending this! 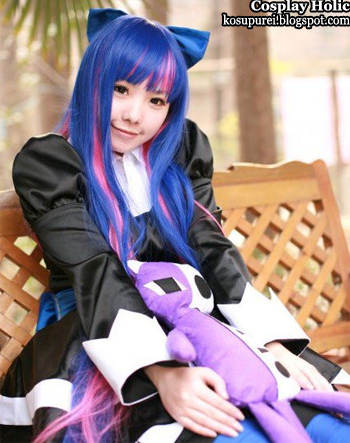 Stocking claims that she has very special standards in men and she would prefer to be with someone she loves rather than just for the heck of it. She strings men along because she doesn’t want them to believe she’s “an easy catch”. Stocking is very loyal and would never cheat on someone she truly loves.

We’ve all seen girls cosplaying male characters, and there are lots of them here in Cosplay Holic. But if I told you the cosplayer behind today’s feature is actually a 14-year-old boy, would you believe me?

Well, that’s what Yukino said when she submitted this photo, and the cosplayer is apparently a friend of hers. I’m not sure what to think, but I do know that he’s really cute though. What do you guys think?

EDIT: Mystery solved! The cosplayer of this photo is actually a girl. Sorry to disappoint(?) you guys, but I’ll try to find out who she is at least!