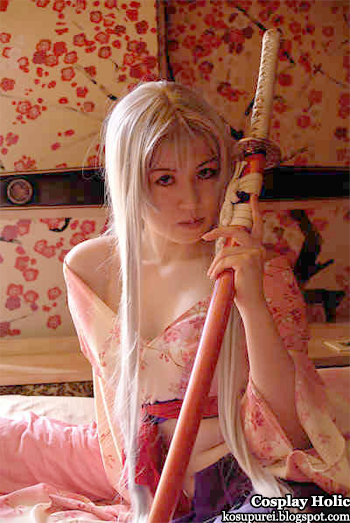 A girl, Natsume Maya, who seeks revenge on her own ex-boyfriend, Takayanagi Mitsuomi, due to the death of her older brother, Natsume Shin…

All the elements of the makings of a really good anime!

I adjusted the brightness of this image from the original picture because it was a bit too dark. You will be redirected to the original look once you click on the image.

EDIT: New thumbnail for this post, so I stuck with the original colors 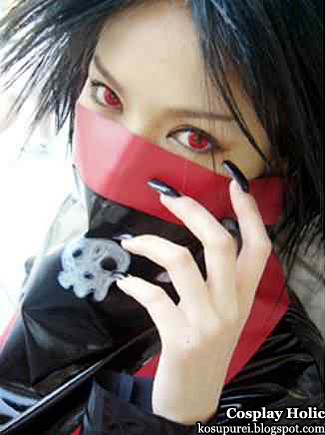 One of the original members of Ryuseigai “Phantom Troupe”, Feitan is a mysterious character who resembles a true thief. He became a member and temporary head of the Genei Ryodan, aka “Phantom Troupe”. He rarely speaks but when he does, there’s always a word or two missing. And since he is proficient in reading Chinese, then Chinese is probably his first language, not Japanese.

I love this cosplayer’s eyes. The red contacts are quite dramatic, and I love the hand-painted skull on his scarf. Beautiful and most impressive cosplay! Bravo! 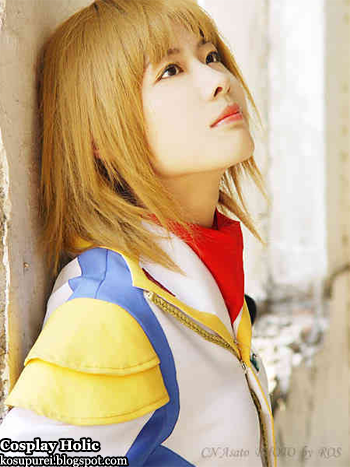 It was in Gundam Seed Destiny that I began to hate Cagalli. I suppose suddenly becoming the “sort of” president of a country is extremely stressful, as well as having to marry someone for diplomatic means…

But I don’t like it that she has to cry so much and ask for so much pity and support from everyone.

Even though I don’t like the character, this cosplayer is so pretty! Though I think I actually like the first cosplayer that I posted then this one (which is a first!). Still… I love the cosplayer, the pose, and the photo! Great Job! 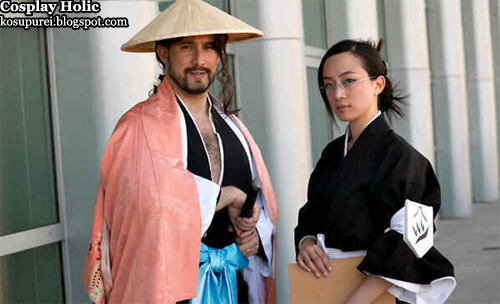 Wait, wait, wait!!! This may be a feature on a Nanao cosplay, but that is not, I repeat, not me!And now that everything is clear… 😀

Kyoraku Shunsui is what would be known as a “lazy” captain. From what we know of him in the series so far, we is often drinking sake or sleeping, to the irritation of his lieutenant Ise Nanao. Nanao is a resourceful researcher with high respect towards her captain.

Apparently, when Nanao takes off her glasses, she can intimidate anyone, even Mayuri, Captain of the 12th squad.

Cute cosplay! This is probably the most accurate pair I’ve seen so far. Great job to both! 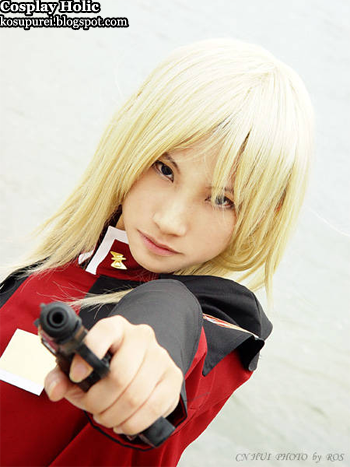 The cool and collected elite gundam pilot, Rey Za Burrel is not one to meddle in other people’s affairs. He is a good friend of Shin Asuka, and is very close to Chairman Gilbert Durandal.

In the past, Rau Le Creuset is also shown to be very kind to Rey, making him quite devastated to find out Rau was killed by Kira Yamato. He becomes even more infuriated at Kira for being the only obstacle to Durandal’s “Destiny Plan”.

This photo was actually taken by the same person who took Cagalli’s photo. This is quite a convincing cosplay of Rey. I just hope he doesn’t shoot anyone who is reading this blog. 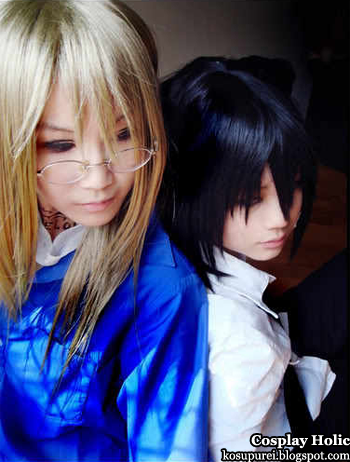 I’ve received a request to find a male cosplayer of Agatsuma Soubi from Loveless. Sadly, I wasn’t able to find one from my collection or on google, so this will have to do, I guess?

Ritsuka meets Agatsuma Soubi on his first day of school. Soubi claims to be his brother’s “fighter” and because of his death, he was now Ritsuka’s. The world of master and servant and spell fighting is later revealed to Ritsuka as Seimei’s world.

I won’t divulge further about Loveless since it’s a shonen ai anime. I hear the manga is yaoi too. I prefer to get out of the Sanriotown Moderators’ way. 8)

Posted on December 8, 2013 by cosplayzone

As his name suggests, Undertaker is an eccentric funeral director and Ciel Phantomhive’s informant who prefers to be paid, not by money, but by a good laugh for any information he might have. At first, it seems that only a select few (Sebastian being one of them) could get him to laugh, but recently, a detective made him laugh by merely introducing himself.

Why that is, no one knows yet.

This is a wonderfully convincing cosplay of the Undertaker! It would be interesting to see this cosplayer in person. Great work!

Posted on December 7, 2013 by cosplayzone

With Tidus’ disappearance, Yuna sets out to find clues to lead her back to him with the help of Rikku and Paine. Although Yuna and Rikku have changed their lives to live in a more positive lifestyle, their companion, Paine, is more emotionally distant and prefers to keep her past a secret from the two.

You have to love the location and the characters’ poses on this photo. Wonderful job on the props too! Great work!

Posted on December 4, 2013 by cosplayzone

Aggressive, violent, and a good cook, Fujibayashi Kyou is the older twin of Ryou and a good friend of Okazaki Tomoya. She owns a scoter and has a little baby boar named “Button”.

In the beginning, she supports her sister’s romantic feelings towards Tomoya, repressing her own feelings in the process. When a rumor spread about Tomoya being a two-timer between her and Ryou, she distances herself from them to ease the tension.

Who Tomoya really chooses in the end is up for debate.

This is Saya, the cosplayer behind Gintama’s Yagyu Kyubei and Sound Horizon’s Violette. Quite an impressive cosplayer, isn’t she? Thanks to ~MPzero~ for the beautiful photography!

Posted on December 3, 2013 by cosplayzone

12-years-old yet mature for his age, Aoyagi Ritsuka lost his brother, Seimei, 2 years ago, resulting in his dramatic personality change and memory loss. Ritsuka used to have a lot of friends in school and gets average grades, but now he is the complete opposite of who he once was. He is now cynical towards others and gets perfect scores in his new school. He once claimed that he is someone else it Ritsuka’s body, but that is because of the abuse he receives from his mother.

Despite his intelligence and maturity, topics about love are uncomfortable to him. Especially when the words “I Love You” come from Agatsuma Soubi.

This cosplayer captures Ritsuka so perfectly, I did a double take when I saw this! I love the hair and the ears so much! Wonderful job!