Latest ‘Django Unchained’ Trailer Is Out & It’s A Must See

The second trailer for Quentin Tarantino‘s Django Unchained has hit the Internet and everything points to this film being one hell of a fun ride. There’s gonna be action, humor, quick-quips from smirking lips, and some serious social undertones to discuss.

My favorite part, I spit soda across my monitor, was Jonah Hill‘s cameo appearance and scene in the trailer. I couldn’t stop laughing, but I’m sure there are going to be lots of other scenes like that in the film.

The movie hits theater screen on December 25th 2012. Will your butt be in a theater seat for this one?

Early Reviews for ‘The Wolverine’ Are In – Sorry Folks, it’s Not Good. Maybe Next Time

Wolverine is one of my favorite Marvel characters. Yes, he’s over used and over saturates the market place, but still, he’s as bad-ass and cool as they come. He’s a tough runt that begrudgingly saves the day. More than that, his character is that of a tortured beast trying desperately hard to find his humanity and atone for his violent nature. I’m deeply drawn to that kind of pathos. Now, however, they same cannot be said with the movies in which Hugh Jackman has portrayed the character. Yes, Jackman is a likeable dude who speaks passionately about Wolverine and the rest of the Marvel universe. At the end of the day, though, he’s just a tall, cut, Aussie who tries so hard to be beastly, but comes off as a peeved under wear model. I, for one, think he is the sole reason we haven’t seen the Wolverine we deserve in any X-Men film of Wolverine spin-off. The movies could be crappy to a degree, but if we had someone that looked and acted the part properly, we might have forgot or at least been a little more forgiving with all the other flaws. Alright, I admit, nothing – not even strength of character – could have saved X-Men Origins: Wolverine. But, what about the follow up? Jame’s Mangold’s The Wolverine? You know, the one that was supposed to be deeper and darker. The one we’ve been waiting for? Well, turns out, that’s shit too!

Below, you’ll find the first wave of reviews for The Wolverine from journalists who attended the UK premiere of the movie.

It hasn’t got the swagger of the Iron Man films or the densely layered story of the Dark Knight movies, but it’s at least getting part of the way towards being that good. Wolverine’s versatility as a character is one of his biggest strengths, and in The Wolverine, we finally have an on-screen demonstration of what that actually means. For all its loftier ambitions, the best gift The Wolverine gives is a simple one: that you’ll leave the cinema wanting to see more of the character. And that’s, straight away, a vast improvement over the last standalone Wolverine outing… [***]

It’s regrettable, then, that in a film concerned with immortality, nothing lasts forever. The final showdown, tonally and in terms of scale, is deeply unsatisfying, with ludicrous reveals, bad CG and plot turns so convoluted they threaten to derail the movie at 300 mph. An improvement on the last outing for Jackman’s not-so-merry mutant. If only it trusted enough in its unique setting to forgo a descent into aggressively awful formula. [***]

X-Men aficionados will no doubt get a kick out of this attempt to deeper explore Logan’s psyche, but you suspect it won’t generate much enthusiasm from Joe Popcorns expecting big-scale spectacle. It feels like there’s a great film buried somewhere inside The Wolverine, it’s just a shame that Takashi Miike wasn’t behind the camera to help make it a reality. As it stands this is an interesting if flawed exploration of the X-Men universe’s favourite son. [***]

Given the critical spanking that greeted the last Wolverine film, you may be wondering what the steel-clawed superhero is doing back on the big screen. a question that isn’t answered by James Mangold’s X-Men spin-off, with a sense of pointlessness permeating every frame. Mangold (Walk The Line, 3:10 To Yuma) promised us the movie was “deeper and darker” than the last instalment while the star, Hugh Jackman, said it was the film we’d all been waiting for. Alas, the wait must go on. [**]

Though by no means identical to Iron Man 3, The Wolverine feels closer to Shane Black’s action movie homage than any other superhero movie to date in that it’s full of references to things that make its creators high five each other with glee (it’s got an even more batshit twist too), and big bold movie cliches are flirted with, and not to its credit, often embraced. The Mariko/Logan romance unfolds pretty much as you’d expect it to, Tokyo is filled with slot machines and sex hotels, and by the final third the dominant arc has return to superhero silliness from its holiday in action-adventure, but all this stylish superficiality is undercut with sincerity. Like one of its stupendously choreographed fight scenes, The Wolverine manages the delicate balance of respect for the source and the convention of the genre, big top sensation, and an unlikely, heart-wrenching emotional punch. [****]

Where is the quicksilver wit and lightness of touch of the Avengers and Iron Man films, or the formal ambition of Christopher Nolan’s Batman trilogy? The previous X-Men film, First Class, was secure enough in its own skin to embrace its comic side. Mangold’s picture affects a pubescent snarl instead: that’s the difference between comic and daft. [**]

Yet though it doesn’t have the vibrant wit and zip of an Avengers Assemble, or the allegorical grandeur of a Dark Knight, it’s a step up from the garbled silliness of Wolverine’s first solo outing. Unlike Origins, the storytelling is more sharply focused here, ignited by flashes of stylized superheroism. The good news? An improvement on Origins. The bad? Not as big an improvement as you were hoping for: perfectly decent, but ponderous too. [***]

I knew it. As soon as I saw the giant robot silver samurai, I knew this movie was gonna be garbage. The resounding “meh” from critics, proves to me that Wolverine appearances by Hugh Jackman cannot and will never be great. Style and story are key, but it all comes down to character and Jackman just isn’t Wolverine.

Special thanks to ComicBookMovie for rounding up the reviews for us to pilfer. 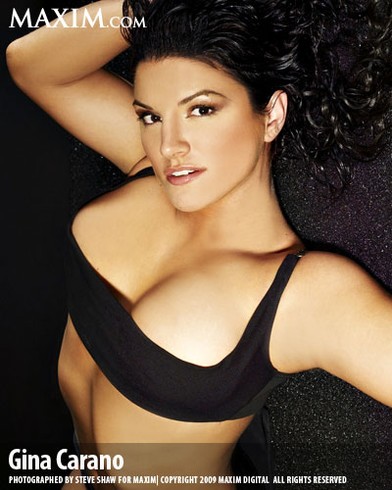 You know you enjoyed my choice of photo for this post and that at this point, you don’t even care what the post is about. That’s fine. You’re welcome. Adi Shankar‘s company 1984 Private Defense Contractors is putting together an untitled film that is essentially the female version of The Expendables. They’re in the process of putting together suitable female actors for the film. Gina Carano, of MMA and Haywirerenown, is confirmed as having been the first to sign on for this project. According to Shankar, casting her was pretty easy:

I don’t know how I’m supposed to make a movie that is supposed to be the female version of ‘The Expendables’ without Gina Carano in it. It would be like making Twix without caramel or Jamba Juice without jamba.

Sounds about right. What do you guys think of this casting decision and of this project in general?