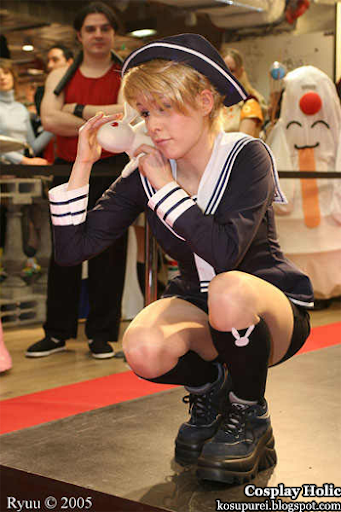 This image just made me go “Awww~”…

I found this on Deviant Art. This is a cosplay of Souma Momiji from Fruits Basket by clefchan. You should go check her gallery out! She has really impressive cosplays and arts as well! Clicking on the image will bring you to her page where she posted this image in a higher resolution.

A bit of Fruits Basket Trivia for you: Did you know that Momiji is the 2nd of the 12 Cursed Souma family members to break his curse?

Anyway, really cute cosplay! Clefchan’s really got the character down, especially the really cute expression..! I love the rabbit detail she put on her knee high socks… And the white rabbit on her shoulder is a nice touch! Great photography by Ryuu! 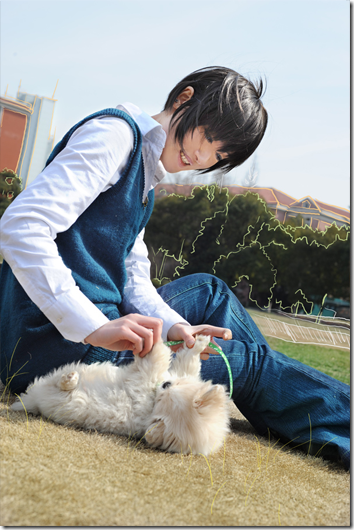 An outgoing and friendly guy, Kazehaya Shota has become so popular during middle school that his admirers formed a “Kazehaya is Everyone’s” alliance in order to maintain some level of peace. More than half of the girls now attend the same high school as he does. What they don’t know is that Kazehaya is in love with Kuronuma Sawako, but he has no idea that she also feels the same way for him.

Such an adorable cosplay by Hagaren! I really love the rough lineart that was added in the background and grass. Be sure to check out Hagaren’s Deviant Art for more photos!

EDIT: Thanks to Fumiki for letting me know that the puppy’s name is Maru! 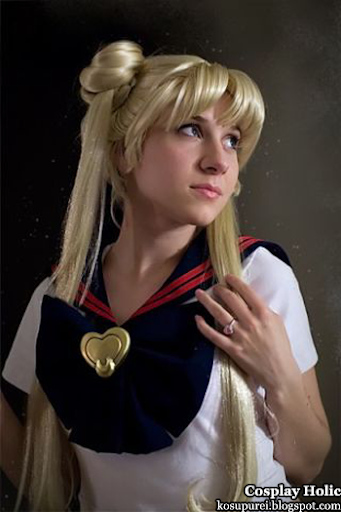 Remember what I said about this blog not being biased about Western Cosplay? Well, here’s proof to back that up.

This is probably one of the best Sailor Moon Cosplays I have ever come across. She’s just really pretty and she’s got the costume right (instead of the usual knock offs)! I love the way she did her hair, it’s really gorgeous.

This picture is credited to Cosplaylab.com. I was able to find this thanks to Maya, who replied to Morbid Optimism defending the Americans against his topic “Americans Shouldn’t Cosplay”. Morbid Optimism posted some really nice Japanese Cosplay pictures, you should check it out. I’ll be posting some of those pictures here too (as well as the not so nice American ones), and give him full credit for finding them first of course… ^_^

Oh~ I’d also like to mention that Megamisan sent me Adella’s Gallery for some nice cosplay photos of Adella. We have the same taste in cosplay! ^_^

EDIT: Thanks to anon for letting me know this is also Saraqael’s work!

The only female member in Team Guy, Tenten specializes in many different types of weaponry raging from projectiles to close combat. She also has the ability to summon hundreds of weapons to attack her opponent simultaneously with pinpoint accuracy. At one point in the first season, she uses her techniques to help Hyuga Neji strengthen his defensive techniques. He is probably the only one who can block all of her attacks.

I actually like her costume in Shippuden than in the first season of Naruto. This photo was taken by Tony Quan, but since I found this in another site and not his own, I’m not sure how to properly credit it. But thanks for the photo!

Ciel Phantomhive is the 12-year-old head of the noble Phantomhive family. He took over the family business at a young age due to the death of his parents. His right eye is always covered because it bears the contract between him and his butler (who is also his bodyguard and a demon) Sebastian Michaelis.

Omiya Lotus is a cosplayer on Deviant Art. She’s a really good cosplayer and it’s thanks to Prudencee Lumiere’s comment that I was able to find her. A huge thanks to Prudencee for leaving me a comment, and to Omiya for sharing her cosplay with us! Please take some time to visit their site when you can!

Posted on October 8, 2013 by cosplayzone

The wielder of the zanpakuto known as the Suzumebachi, Soi Fon loves her master, Shihoin Yoruichi and adores anything that resembles a black cat because it is a form Yoruichi can assume at will. When she releases Suzumebachi, which literally means “hornet” or “giant sparrow-bee”, the katana shrinks into a stinger that can be worn on the middle finger of her right hand. A sting from Suzumebachi will mark an opponent with a butterfly symbol known as a homonka or “hornet’s crest”. If stung in the same place twice, the opponent will most certainly die.

Beautiful Canadian cosplayer ~Pyrahus from Deviant Art! Reader Tara has given me Pyrahus’ gallery, and I think this is one of my favorite photos of her. Thanks also to her photographer ~Kanna-tears for the awesome work!

Posted on October 7, 2013 by cosplayzone

Kanda Yu is a Second Exorcist, created in the Synthetic Disciple Project Central forced onto the Chan and Epstein families nine years past. Because of this, he can see lotus flowers blooming wherever he goes. In the anime adaptation, these flowers act as an hourglass indicating his lifespan. The flowers begin to lose its petals as he approaches his death.

Cosplay Holic reader Materialistique sent this over and needless to say, I was shocked. It may be just a profile picture, but you can really tell that it’s Kanda from D. Gray-Man! Thanks Materialistique!

Now the only problem is, the cosplayer’s name is also Miyoc, but she is the President of CNcos – Chinese New COS group from Shanghai and not the Miyoc I have tagged in Cosplay Holic. Since making a new tag in all caps is not going to work in Blogger, does anyone have any suggestions? Thanks guys!

Posted on October 6, 2013 by cosplayzone

Lelouch of Britannia and Suzaku of Japan first met when Lelouch and his sister, Nunally moved to the Kururugi residence as a diplomatic peace trade. Suzaku initially thought Lelouch was a prince who did not care for anyone other than himself, but as he came to know him better, they became the best of friends. They were separated from one another when Britannia invaded Japan, but were reunited once more in the Shinjuku Ghetto.

Beautiful cosplay! I can see a smirk in Lelouch’s face which is actually how I picture him to be. Suzaku looks very charming as well. Thanks to Tamina for sending this in!

EDIT: Thanks to anon for crediting this photo to Kanasaiii and Lenneth XVII!

Posted on October 4, 2013 by cosplayzone

Revealed to be the first ancestor of the Kuran Family, Kaname was awakened from his slumber at the sacrifice of his descendents’, Haruka and Juuri’s, child. Rido murdered the baby, who ironically had the same name, with the intent of devouring their ancestor to strengthen his own powers.

Kaname was able to stop Rido’s plans temporarily, but was too badly injured and starved after several years of sleep that he knew he could go berserk at any moment. Kaname then chose to fall into Haruka and Juuri’s mercy and turn himself into a baby, a form that would not need a lot of blood in order to survive, and put his own memories to sleep so that it would not get in the way.

The second character to reach 10 different cosplay features in Cosplay Holic! I didn’t know this series was so popular, specifically this character as there have been a lot of fan bashing lately. Thanks to Blood Red Princess for sending this in!

EDIT: Thanks to anon for crediting Rainer Tachibana as the cosplayer!

Posted on October 2, 2013 by cosplayzone

When Syaoran was revealed to be a clone, Sakura became distant from the group, especially to the real Syaoran. Although her soul is eventually killed by the clone, she confessed that she is merely the clone of the real Tsubasa. Fei Wong Reed created her for the sole purpose of mapping out dimensions by finding the scattered feathers.

Beautiful cosplay! Eini Lei is the cosplayer behind this Sakura and =kirawinter is her photographer. Thanks to Valarie for sending this in!