Posted on February 8, 2013 by cosplayzone

I never really like calling my posts reviews because these are so subjective ! I tend to spend most of my time in artist alley/dealer so my experiences definitely vary from average con goer.
Ikkicon is one of the two main anime conventions in Austin, TX (there are others in surrounding cities like Ushicon in Round Rock, TX). Currently it is the largest attended anime con in the city with 6,000 in attendance (roughly). This year it returns to the Hilton Austin after a one year run at the AT&T Conference Center – I attended that for a day last year.
– Photos + Video after the jump –

Ikkicon will feel very familiar to any con goers – artist alley/dealer hall/art show/maid cafe/cosplay chess/masquerade/video game room and so forth. There’s plenty of Texas represented here from the major cities to smaller towns scattered throughout the State. Now San Antonio is a hour away, Dallas is three hours away and Houston is about three hours but there are people I’ve met who travelled from out of state to this con.
Ikkicon would be what I call a mid-size con. It definitely has the pull to draw people as far away as Louisiana to attend and it’ll only get bigger. The layout of the con is pretty simple – two floors and the lobby area. What threw me off is that technically there is no 3rd or 5th floor so the floors jump from Lobby to 4th to 6th (Lobby is actually on the 2nd floor). The layout between floor 4 and 6 are roughly the same and you can easily find the rooms.
There were some glitches – but then again, you expect glitches because not everything can be perfect. I got conflicting dealer closing time from the website to the program book and volunteers weren’t aware of the hours – again, I don’t expect everything to be perfect. 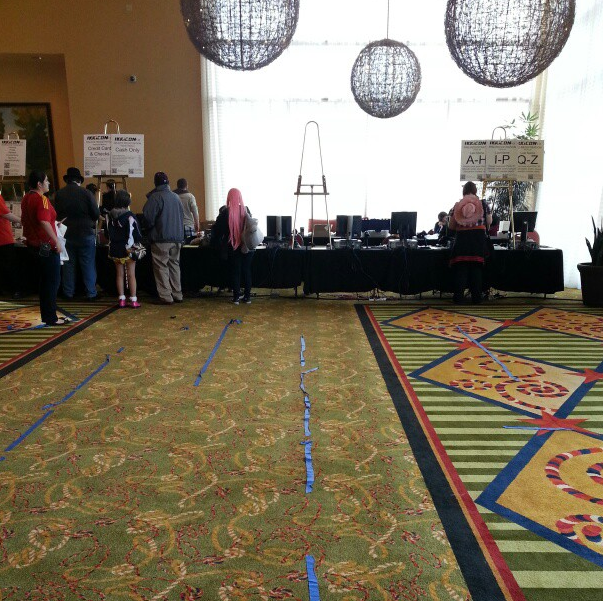 ( Registration line on Saturday around 10 am )
I had forgotten to register so I arrived about 20 minutes before registration open to get in line. Surprise, surprise, there was very little line. Reg open early and there were about 15 people in the pre-reg line. I paid at the con so I basically didn’t wait in line. Tip : for bigger cons (like Anime Expo), sometimes it helps NOT to pre-reg so you can get in and out quicker. Your choice is if you want to pay more since usually at-con registration is more than pre-reg.
The line was long for the dealer hall but if you waited about 10 minutes after they open the door, you can just walk right in. Dealer was laid out pretty well and at no point was there just too many people in the aisles … well – that would be in artist alley where the aisles are smaller.

(Peach Bear wasn’t too happy I decided to sit at another table)
At Ikkicon, Peach Bear was nice enough to split their table with me. I had met Kris and Kat before at A-kon (though I didn’t remember at first) and they turned out to be soooo much fun ! *almost too much fun*. I had my book as well as new items I was trying out like mouse pads, 8×10 prints of chibi Ejen and cosmetic bag of chibi Ejen… oh, posters as well. I sold pretty decent amount of cosmetic bags so definitely doing more of those. My book sales was just what I expected for a con this size. I have a limited amount of books left so I’m bringing much smaller volume with me to cons now.
I checked out the models, I really wanted to get into collecting but that’s an expensive hobby to get into. Recently, I’m into phone charms that I can tie to my camera strap so I picked up a Homura one for $10. 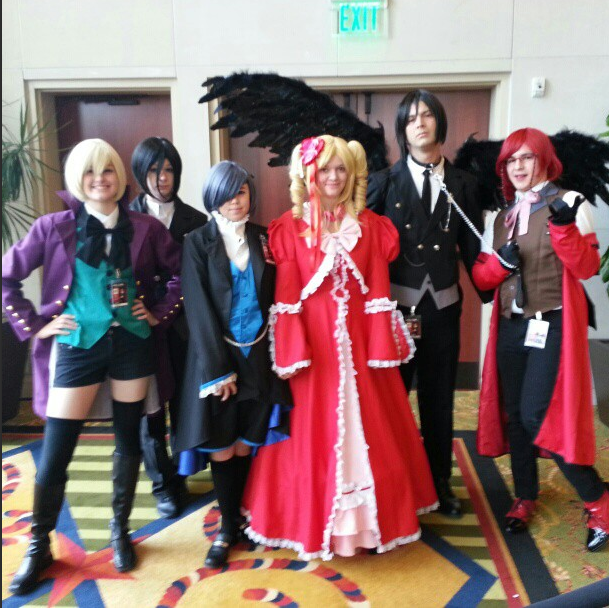 (See more Ikkicon cosplay photos here ; http://instagram.com/cosplayamerica )
Cosplay-wise, there was a lot to see. Homestuck looks to be the biggest fandom but you saw the usual suspects : Panty & Socking, Black Butler, Madoka Magical, Sailor Moon, Hetalia. Surprisingly, I’ve seen a lot of Jack Frost. Maybe not so surprising. The movie just came out and the cosplay can easily be put together. I counted 8 or more ? Surprisingly, I found a male Jack Frost cosplayer – very unique since mostly females cosplay the character. Some stand out includes : #8 from the 9 movie, Gaige from Borderlands 2, Jonah Jameson from Spiderman, and Charlie Chaplin.
I did managed to do some photo shoots to try out my G15 point & shoot I just got. Ran it through the paces doing videos and found some slight situations I have to work around. When I finally get back to Los Angeles, I’m gonna have one of the images printed up to 11 x 14 and check out how it looks. The image looks fine on the screen and online but does it stand the test if being printed large ? If it passes, I’m definitely incorporating using the camera in addition to the 5D for the next book.
For those who live within a few hours of Austin, I say it’s worth the drive to come to this con. Personally, I’m here to share the holiday with my sister and my folks (who drove up from Houston) so going to the con was just the cherry on top 🙂
Next con : Taiyou Con in Mesa, AZ on Jan. 4-6, 2013.