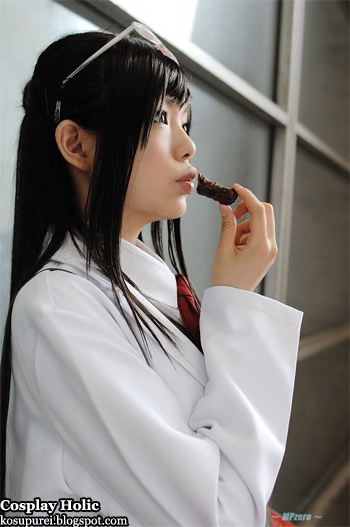 The young (and cute) detective of the 4th Gyakuten Saiban Series, Houzuki Akane, also known as Ema Skye, is a scientific investigator in her own right. Sadly, when she returned to Japan after studying abroad, she became a Detective, and assistant to Prosecutor Klavier Gavin. A lot of people identify Ema’s arrival with the sound of her munching on Karintou/ Sanckoos, a type of Japanese snack consisting of fried dough cakes.

I showed this photo to a friend of mine and she exclaimed, “she doesn’t look real!” I would have to agree on that. This girl must be very cute IRL. It makes me wonder what that Karintou tastes like.

The usually cool and collected detective who specializes in international cases, Mayudzuki Daian, aka Daryan Crescend from Apollo Justice: Ace Attorney, is the bass guitarist of The Gavinners and a close friend of Garyu Kyouya’s. He can be pretty sensitive about certain things like his guitar playing; criticizing on which can make him lose his cool and turn into a jerk.

What can I say? That hair-style is pretty impressive. I doubt that’s actual hair on his head, but it’s pretty accurate to the character. I love his jacket too.

Posted on October 1, 2013 by cosplayzone

Baran (Valant), Yumi (Thalassa), and Zakku (Zak) are members of the trio of the Gramarye Troupe. When Zak was accused of Arumajiki Tensai’s (Magnifi Gramarye’s) murder, Zak had to leave his daughter under the care of Naruhodo Ryuichi (Phoenix Wright), who was Zakku’s lawyer at the time. The incident left Baran to revive the popularity of the Gramarye Troupe on his own.

Very cool cosplay! Though I wish we could see Baran’s face, Zakku’s expression is priceless. Thanks to Ophelia for sending this in!

Once a nurse under Ukari Teruo (Dr. Pal Meraktis), Namina Minami (Alita Tiala) was Ukari’s assistant during Kitaki Takita’s (Wocky Kitaki’s) critical operation. Ukari failed to extract the bullet in Takita’s heart, but the doctor did not dare to admit this as Takita was the heir of a family of feared gangsters. Minami agreed to keep this failure a secret and proposed marriage to Tiaki in order to gain all of his inheritance the moment he dies from his injuries.

Such an innocent-looking girl, you wouldn’t think she’d be capable of something so devious. Thanks to Clara for sending this in!