Lost Planet 3 is a third person shooter developed by Spark Unlimited and published by Capcom for Microsoft Windows, PS3, and Xbox 360. The game is the prequel to Lost Planet: Extreme Condition and Lost Planet 2, and takes place on the same planet of E.D.N. III. The game will take a more story-driven narrative approach to the campaign similar to the first game. Unlike previous games in the series, which were developed internally by Capcom, the game was developed externally by Spark Unlimited with Matt Sophos serving as game director, though series creator, Kenji Oguro, is still attached as franchise creative director. This follows a recent trend of Capcom games being developed by Western developers rather than internally, such as DmC: Devil May Cry. I will start off this review by stating that Lost Planet 2 was one of my favorite games of 2010, and I believe is probably one of the most enjoyable co-op experiences I have ever played, other than the Borderlands games. With that said, I was kinda disappointed to hear it was going back to the style of LP1, and was focused on giving a more in-depth single player experience. The single player experience is not bad, but isn’t toppling any milestones either. The game takes place long before the events of LP1. The game follows the story of Jim Peyton, a colonist who is working for the Neo-Venus Construction company, or NEVEC, who later become the main antagonists for the series by helping mine the planet, and sending minerals back to Earth, where his family awaits him.

The writers of LP3 deserve some praise. This game does a great job in showcasing each character by giving them moments that build their character, as well as showing their history. This can be seen in video messages between both Jim, & his wife back home, giving his character more of a backstory, showing his motivation on why he is doing this. game play-wise Lost Planet 3 keeps the third person shooter action that was akin to it’s other titles. You will find yourself fighting the native Akrid by using an arsenal of weapons to shoot at their glowing weak spots, and A.I opposition, sad to say the A.I in LP3 isn’t very good. It doesn’t bring up a challenge as it starts to feel like repetitive firefights over the course of the game. However if you do want to change it up, you have access to the Rig. Your mech which you use to traverse the landscape of E.D.N. III. Also while in this Rig you take on a first-person view, and will use this Rig to accomplish some key objectives, as well as fight off some of the larger enemy Akrid. However these battles can get boring, as you mainly have to wait for the Akrid to attack so you can counter. Despite this, because of the Rig, it helps LP3 stands out from other shooters by giving the player a different option of play styles, than it’s very basic third person shooter scenarios.

The setting of LP3 is one of the games strong points. E.D.N. III has never looked better, and players will see this frozen over planet in different ways. Using the Rig you can traverse this planet however it can be pretty dull after awhile. The interior set pieces are one of the differing sets you will see in contrast to the snowy environment. Character designs is also practically good, not the best but the character models are showcased well in cutscenes. Akrid design is also reminiscent to LP standards, as they resemble inscetoid like hybrid creatures, with these glowing weak points.

Despite not having co-op LP3 does offer a Multiplayer experience. From multiple gameplay types varying from Deathmatch, King Of The Hill, and Capture the Flag with a unique Lost Planet twist to each. But it’s nothing spectacular, and given the very standard gameplay of the overall game, it can get boring quick. Overall, Lost Planet 3 is a pretty decent game. Nothing really groundbreaking, but the strong acting, greatly detailed snowy environment, and Rig action is the games strong points. However the repetitiveness and very standard gameplay is what makes this game just another third person action game at it’s core. Lost Planet 3 gets a 3 out of 5.

Iron Soldier: The Greatest Video Game You Never Heard Of

When I was about sixteen, I wandered into my local toy store to find in the clearance rack dozens and dozens of boxes of the Atari Jaguar game console system. It was on sale for $30, KA-CHING!!! That’s mine now! You all know the real reason I bought this console if you were into gaming back then; I thought I had a chance to get a copy of Alien vs. Predator, which at that time was only available on the Atari Jaguar. I spent months looking for a copy of Alien vs. Predator… all hopeless efforts as it seemed Atari had no interest in making money and I was left with just mediocre $10 games from the clearance bin.

But then I found it, the greatest game I never knew about: Iron Soldier. What is Iron Soldier? It’s was an Atari Jaguar game about a giant robot that walked around cities and destroyed them, and you played as this robot. Before I bought this game there wasn’t a hair on my body, after I played Iron Soldier I had a chest full of hair, a lumberjack beard, and I smelled like diesel fuel. Naturally that is how much testosterone this awesome game injected into me. 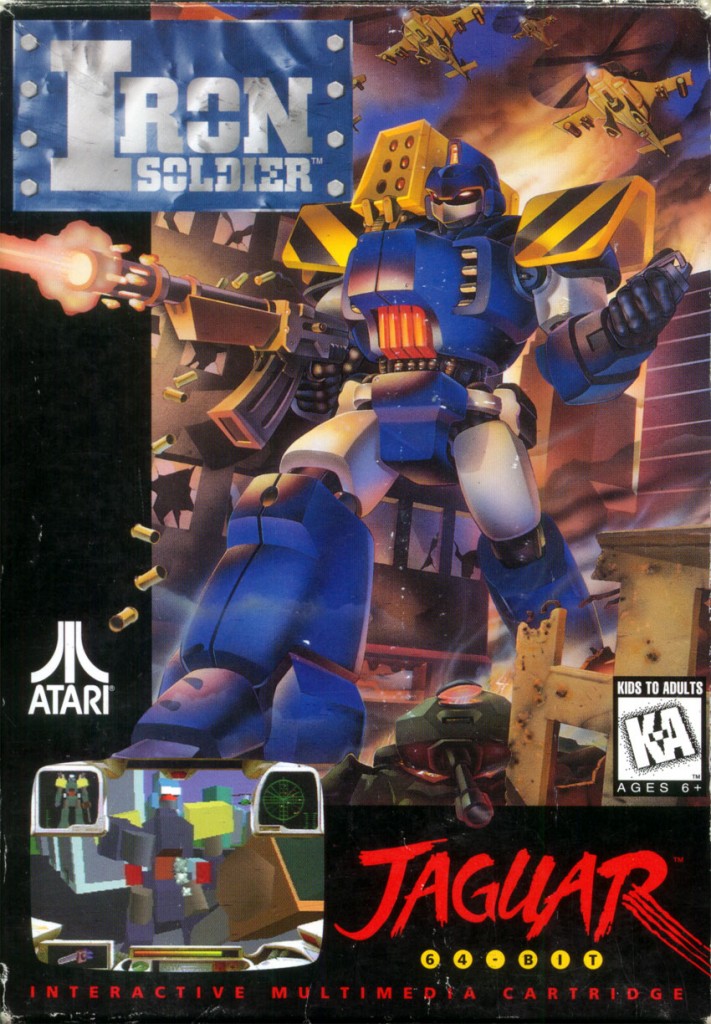 The game’s plot? Not important.

Moving on to weapons, you start off with an assault rifle, I was going to say a basic assault rifle but there is nothing basic about it being the size of a school bus. Uh oh, so I just ran out of ammo with the assault weapon what do I do? Punch sh*t is what you do. Punching buildings and stepping over tanks as they explode beneath your feet of awesome steel. And just when Bank of America thinks they’re safe behind a reinforced skyscraper, that’s when you get an upgrade; a gawd damn chain saw to replace your fists. Time for some spending cuts Bank of America… to your face.

The weapon upgrades get even better: mini-Cooper sized hand grenades, a Gatling gun, rocket launchers, rail-cannon, and a cruise missile that you pilot around to crash into buildings and stuff. Oh, there’s also a stupid shield that I would never use because that’s for p*****s. I really wish they replaced this item with a flamethrower because then Iron Soldier would have been the greatest game ever made.

What the hell happened to games like this? Why are so many things off limits in game titles these days? Oh see those beautifully rendered buildings and scenery we blew half our game budget on? Yeah, you can’t touch those even if you’re a super soldier robot, the Hulk, or Satan. Iron Soldier had some lame graphics when looking back on it, but the focus of the game wasn’t to look pretty, it was to blow stuff up (actually everything up). I wish more game studios in 2013 would learn a thing or two from Iron Soldier. Maybe gamers don’t care about how realistic you make a dog peeing in the park, maybe we just want to set that dog on fire.