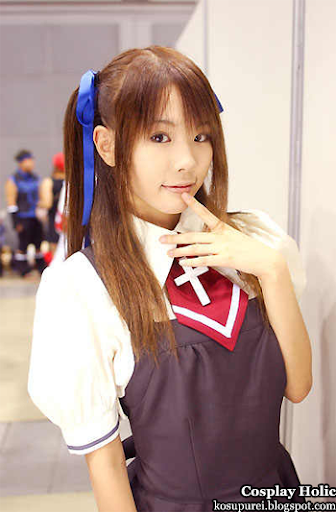 Being an otaku means entering into a world of fantasy where anything can be achieved by anyone. This is a place where people sometimes become a fantasy themselves just for the heck of it…

Enter the world of cosplay.

The term “cosplay” is a merge of 2 words: costume and role-play. As the word suggests, people wear costumes of their anime character of choice then role-play the character, including his/her mannerisms and attitudes.

I have never actually cosplayed myself, though I do appreciate how people work hard to get their costumes and hairstyles to look just right. On the picture is an example. This girl is cosplaying Tono Minagi from the Anime Air. Otakus who are familiar with the anime will think she jumped right out of the game and into the real world.

Now this is what is known to be “real” cosplay…

The first of three girls featured in Air, Kamio Misuzu lives with her foster mother and aunt, Kamio Haruko. She is cheerful, slightly clumsy, and often says “Gao” whenever she feels troubled or is about to cry. She loves dinosaurs ever since she was young, and once believed that baby chicks were actually young dinosaurs.

I’ve reached a decision that I thought I would never make. From now on, I will be adding a Cosplay Holic link to every photo I feature, because quite frankly, people who steal my content don’t even bother to upload their own photos and simply hotlink mine! I hope adding this will discourage them, even if it’s just a little bit.

Of course, I will still continue to link wherever it is I first saw the original photo and credit cosplayers and photographers whenever I can. So thanks to for sharing this!