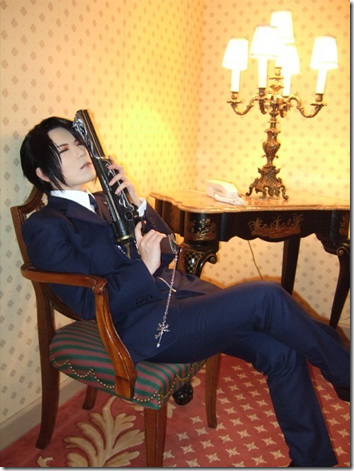 Thirty years before the beginning of Final Fantasy VII, Vincent was a member of the Shin-Ra Electric Power Company’s Administrative Research Division; a fancy title for the company’s Black Ops unit more commonly known as the Turks. At the age of 27, he was assigned to supervise the Jenova Project in a town called Nibelheim, and fell in love with one of the supporting scientists, Lucrecia Crescent. Despite their love for each other, Lucrecia harbored a secret past related to the death of Vincent’s father and therefore decided to break off the relationship, leaving Vincent for another scientist named Hojo.

Impressive cosplay of a much younger Vincent! Although I didn’t think he was actually so old in the game. Thanks to Feanne for sharing this!

Aside from her original role in Final Fantasy VII, Yuffie has made several other cameo appearances in the game franchise. In the Dirge of Cerberus, she helped Vincent and aided the WRO in their fight against Deepground. She also encountered Zack in Crisis Core and enlisted him to help her find treasures in several of the game’s side missions.

I can say one thing, she’s pretty daring to be wearing Yuffie’s clothes during Winter Comiket. Thanks again to Somiya for sending this in!