The reveal of the next actor to steer the TARDIS always brings about speculation about what kind of Doctor they’ll make. Will he be kind? Sympathetic? Cranky? Boisterous? There’s a lot of ways Peter Capaldi could play the Twelfth Doctor, but the main thing showrunner Steven Moffat is looking to achieve is something different.

In the latest edition of Doctor Who Magazine (via Doctor Who TV), Moffat shares a few hints at what we can expect of Capaldi’s Doctor,

Moffat is pretty certain Capaldi will keep his native Scottish accent for the role
At the moment, they’ve only discussed Twelve’s costume in the lightest terms
Moffat wanted to flip the switch the other way after having two youthful and accessible Doctors in a row
He’s going to be an older, trickier and fiercer Doctor
“Just as Clara’s learning to have a proper old crush on him, suddenly he’s Malcolm Tucker!”
Moffat thinks it’ll be fun seeing Clara cope with the Doctor being completely different…
…”I think the fun story will be – and we have the opportunity here – is this is what regeneration can do to you. He can be very, very different.”
“People really love Jenna, so we make the Doctor quite difficult…”
…Moffat likens the situation to Tom Baker’s first season: “He’s really quite difficult to take at the beginning, and you’re very grateful that Sarah and the Brigadier are there to reassure you.”

Other than Moffat implying Clara couldn’t possibly develop a crush on The Doctor now he’s changed and become older, I’m excited about what’s discussed here. Besides the amazingly good chemistry between David Tennant and Billie Piper, what made the transition between Doctors Nine and Ten so engrossing was seeing it through Rose’s eyes. We didn’t get that when Ten became Eleven, and that’s all right because his first contact being Amy helped develop that very special relationship.

I am definitely looking forward to seeing Clara’s reaction to The Doctor’s regeneration. Particularly because she should be no stranger to regenerations having followed The Doctor though his entire time stream and because they’ve already done a great job showing Clara’s a companion who reacts quite differently. “It’s smaller on the outside,” for instance.

I’m also getting the impression some might consider Capaldi’s Doctor mean or too stern, judging by those comments his Doctor will be “fiercer” and that they’ll make “the Doctor quite difficult.” Guess we’ll have to see how that all pans out in Season 8. And how would you like to see the Twelfth Doctor dressed? It seems they’ve barely scratched the surface on his wardrobe, but surely, you have thoughts, yes?

And while we await an official look at Capaldi as The Doctor we can get a jist of what to expect from these leaked images of the Twelfth Doctor’s action figure,

Shared by BifBangPow (via Blastr), it ain’t much I’ll admit. Basically all we can make out it yes, that sure is Peter Capaldi, and oh, look how he’ll be styling his hair. And even that may change before he officially takes over for Matt Smith.

Are you all looking forward to Capaldi’s Doctor? Do you like the direction Moffat is hinting at?

Steven Moffat and Frank Skinner recently sat down at an Ad Lib‘s live chat at the Edinburgh Fringe last night (Wednesday) and Skinner asked a question that many Doctor Who fans have been wondering about. How many times can the Doctor regenerate?

Moffat’s answer is certainly interesting, does this mean that Peter Capaldi‘s Twelfth Doctor is the last Doctor? How would the show move forward after Capaldi’s run? Would it reboot in its entirety? I’m thinking that there are plenty of ways for Moffat, or the person who takes over Doctor Who‘s reins next, can skirt around the problem.

Perhaps when River gave the Doctor her regenerations it was all of them.

There’s always the old “Doctor Who Alien that changes everything we knew about whatever the problem that needed solving” out that the show has used from time to time.

If this is a strict limit on the Doctor’s regeneration, where does that leave John Hurt’s Doctor? That one will take a bit of fast talking to fix. Moffat would like nothing better than to come up with something clever that sets the world of Doctor Who Fandom on its ear.

What’s your take on the whole thing?

A TARDIS Makes Fezzes Even Cooler 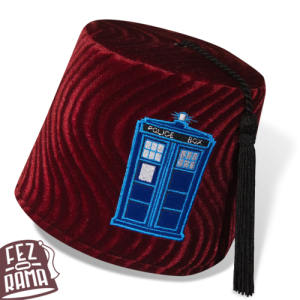 The Doctor’s plain red fez was okay, but it lacked pizazz. This design featuring the TARDIS is much more likely to turn heads – for better or worse (hey, fezzes aren’t for everyone).

This bold design is the fez of the week at Fez-o-Rama; be sure to grab it before it’s gone!