There’s always a fair amount of French Maid cosplays in Anime Conventions that I find it hard trying to keep up with all of them.

She looks like she’s cosplaying a specific character with the details she put into her hair and the straps on her leg. I’m wondering if that clip on her apron was also done on purpose. Compared to the other French maid cosplayer I feature a while back, I think she’ll be easier to guess.

EDIT: Thanks to anonymous for leaving a comment saying this is Izayoi Sakuya of Touhou Project! I hope people leave their names next time, though.

Posted on September 4, 2012 by cosplayzone 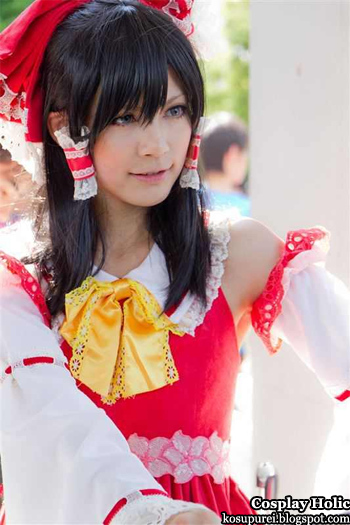 In earlier installments of Touhou Project, Hakurei Reimu’s spiritual abilities were so limited that she was unable to directly harm enemies in “Highly Responsive to Prayers”. However, succeeding games gave her stronger abilities, including being able to manipulate the Hakurei Yin-Yang Orb, special amulets, and higher spiritual power. Sometime between “Mystic Square” and “Embodiment of Scarlet Devil”, Reimu also discovered that she had the ability to fly on her own.

Another amazing cosplay from Japan’s Comiket 82! The addition of lace to her costume definitely sets her apart from the other Reimu cosplayers I’ve featured so far. Thanks again to 2chmod for sending this in!