Days of Future Past is going to be an all-star X-Men–palooza, but one of Marvel’s Merry Mutants is now suggesting that his appearance in the upcoming X-film may be his swan song to the part that made him a movie star.

Yes ma’am (or sir), we’re talking about Hugh Jackman, and although he’s been very complimentary about the experience, the actor seems to be indicating that Days will be the last time he’ll play Wolverine.

“It may be the last,” he said. “By the way, it didn’t hit me until three weeks before the end [of shooting X-Men: Days of Future Past], because we promoted The Wolverine and I came back on set with three weeks to go, and that’s when I went, ‘Well, who knows? Maybe there’s no more Wolverine. Maybe this is it. Who knows? Maybe.‘”

Although it’s been a 13-plus year odyssey, Jackman isn’t feeling much in the way of regret or remorse if this does indeed turn out to be the final time he slips into a pair of Adamantium claws. “I really made the most of those last few weeks. I enjoyed every time I put the claws on. I nicked everything off the set, so Halloween, come to me and I’ll hook you up.”

In the meantime though, Jackman continues to heap praise on Days of Future Past. “I keep saying it’s like two movies in one, but with the size of it it’s really three in one,” he added. “It really is going to blow people away because of the story.“

Well, you can’t fault his enthusiasm. Wolverine was a difficult role to pull off, and Jackman did so with aplomb, and it will be a sad day when he leaves the role for good, and it will be very difficult for someone new to take up the part standing in Jackman’s shadow.

More news as it develops. Days of Future Past is in theaters next summer.

How Useful Is Wolverine Anyway? ‘The Pete Holmes Show’ Knows.

We’ve been featuring comedian Pete Holmes’ sketches here for quite awhile. We did a round-up of his Batman parodies, and we enjoyed the one featuring Patton Oswalt and Holmes’ response to Ben Affleck as Batman in Good Will Batman. Now he’s branching out of Batman territory and stating what some of us have always thought about Wolverine: how useful are his powers to the X-Men, really?

Pete Holmes stars as Professor X in this sketch which debuted at New York Comic-Con and is now finally online. It has better CGI on the claws than the ones in X-Men Origins: Wolverine. The dialogue is a huge improvement, too.

“Where did I come from, though?”

“But where did I come from?”

These “Ex-Men” segments will be a recurring sketch on The Pete Holmes Show, on TBS after Conan starting October 28th. Hopefully they’ll finally answer the question that has so far been left unanswered. Harvey Dent. Can we trust him?

They say that Wolverine is the best at what he does, and it seems that what Hugh Jackman is best at is playing Wolverine.

Jackman, who is currently in the midst of some awards consideration for his portrayal of the persecuted Jean Valjean in the upcoming screen adaptation of the long-running stage musical Les Miserables, is in talks with the producers of X-Men: Days of Future Past to reprise the popular role of the feral mutant Wolverine in the film, according to The Hollywood Reporter.

As previously announced this week, both Sir Patrick Stewart and Sir Ian McKellen have joined the cast of Bryan Singer’s latest X-Men opus. The accomplished thespians, who appeared as Professor X and Magneto respectively in the first three X-Men movies, will join stars of the recent prequel X-Men: First Class – James McAvoy, Michael Fassbender, Jennifer Lawrence, and Nicholas Hoult – in the new X-Men film. The film, which is based on the classic X-Men comic book story of the same name, will combine casts and characters across many, various X-films covering the past, present and future of Marvel’s Merry Mutants.

Of course, Jackman hasn’t strayed too far from Wolverine, who he first played in X-Men in 2000, which was followed by X2 in 2003, and X-Men: The Last Stand in 2006. Jackman appeared in the solo adventure X-Men Origins: Wolverine in 2009, and cameoed last year in First Class in a scene with McAvoy and Fassbender. Jackman recently wrapped up the sequel The Wolverine, his second solo film as the character, which is due for release next summer.

Now naturally, getting Jackman to appear in any X-Men project is a no-brainer, but Wolverine plays a pretty significant part in the comic book story. The question is, will he have an equally compelling part in this movie? And does this bode well for a coming announcement that Ellen Page will appear in the film as Kitty Pride? I think this project gets more and more interesting, I just hope that they don’t show all their cards before the film’s release and save at least a couple of surprises. 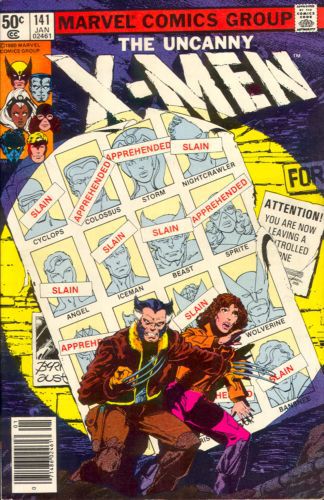